Most work done on Seal Hunter lately has merely been about polishing the overall first impression of the game and making things a bit more logical. With a prototype version having been sent off to PlaygroundSquad as my work sample (and after doing some serious code crunching) I’m rather relieved and miscellaneous UI elements is all I’ve been working on lately.

As well as this bastard of a menu which was an utter pain to code. Or well, at least utterly boring. 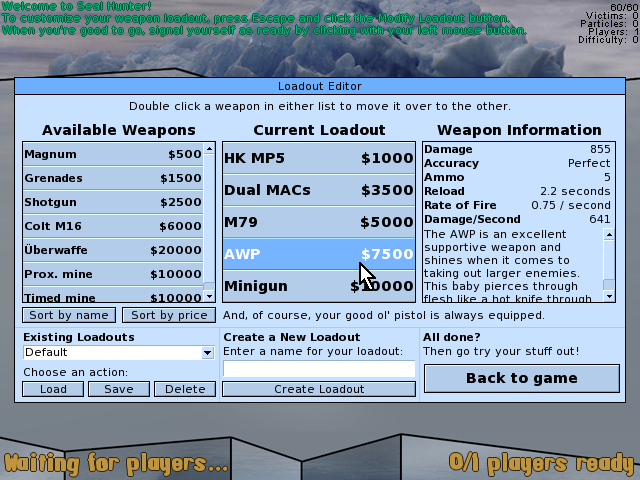 In a vain attempt to explain this rather muddled menu and its purpose, as mentioned earlier players will be limited to carrying only a certain number of weapons at once – or rather, only being able to buy these weapons during a game round. The weapons carried make up the player’s loadout. This magical number has now after some contemplation been set to five, which means that players are able to pick out five weapons (or less, if you’re hardcore enough) before starting a game – and they can then purchase these weapons during the game. Easy enough, right?

Some of you might not like this, but there are two major reasons for this design decision:

Why five weapons? A player rarely purchases more than three weapons during a game, so technically I could’ve limited it to three or perhaps four, but I didn’t want to become too strict on the player. Should something unexpected arise during the game (…as if) the player should not be penalized all too much, but should instead be allowed a sort of second backup plan if things would go utterly haywire.

Also, I need your help to come up with rank titles! Pay the forums a visit and give me a hand; it’d be very much appreciated. :-)