Fun to the Z

Whilst Seal Hunter thankfully is a 2D game, there’s still a Z property of certain game objects in order to give the illusion of depth in the scene, and since it’s pretty darn useful to have when it comes to particle effects. This was in itself entirely trivial to implement in 2D back in the day (just offset the y coordinate by the distance the object is above the ground etc etc) – but the difficulty of adding it to the game isn’t what this is about, it’s moreso a proof of how extremely messed up I am.

Like how this was the first method of testing bullets that came to my mind. Yay! It’s a… Oh dear. I’ll happily leave any interpretations of the above to the reader – for better or worse. (And yeah, I know the reflections are closer to shadows in this screenshot. That particular issue was fixed not a long time afterward, soon as I actually realized how the real world works.) Having a peek at the screenshot below, you’ll see the results of increasing the blood amount an itsy bitsy bit and increasing the initial Z velocity of gibs; a frickin’ volcano of blood and meat after killing a single seal. Yeah, I was bored, but it sure looked spectacular. 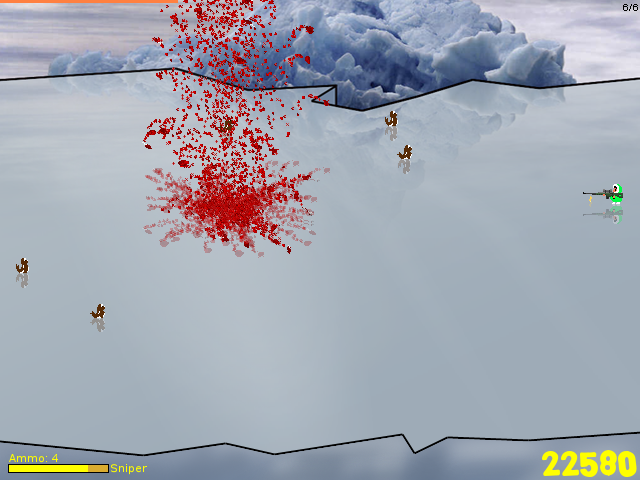 Besides allowing for the implementation of bouncing weapons such as the grenade launcher and the thrown hand grenades, the possibility to do the jump-onto-crawling-seal-and-crush-the-hell-out-of-it move was added in as well, but this time with a rather major change. In my version of the game, jumping is entirely player controlled, which basically means the jump action is bound to a key just like moving around on the field is. This was mostly due to being too lazy to sync up the automatic jump animation across a network, but it also added a bit of a challenge to finishing off a crawling creature (I might be a terrible player, but I think it’s bloody hard to actually land a jump perfectly). For the curious, you aren’t able to fire your weapon while mid-air either; the reason for this being that weapons with bouncing bullets (again, the hand grenades and the grenade launcher) got way too powerful. 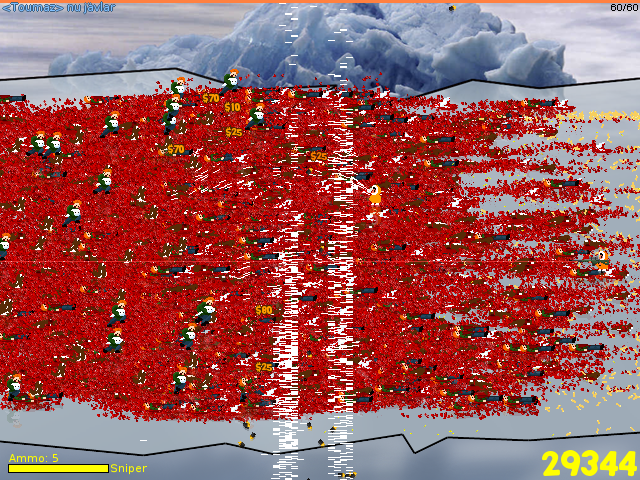 Speaking of bouncing bullets, and to finish this God forsaken post off, there was a rather amusing bug early on related to those that lead to us playing around with it for about half an hour. And yes, that screenshot is very old. Basically, whenever a bullet bounced off of the ice, its Z velocity direction will be negated (so that it will bounce back up after going downwards) with a loss of speed as well. This was accidentally also applied to the X velocity (the horizontal speed and direction of the bullet), which lead to bullets that got ‘stuck’ after a few bounces, becoming stationary on the ice and not disappearing until an unlucky enemy walked straight into them. Oh gee, mines! Hilarity ensued, and that’s all there is to it, pretty much. Was fun while it lasted. ;)