Thanks to a prolonged exposure of The Seal Hunter and a three month Internet outage, I finally got bored enough to actually open up Dev-C++ (a (very bad) C++ IDE, for those who don’t know already) to see if I actually would manage to make anything more graphical than a console application that asked the user for their age. As it were, the only library I had available to me was one called Allegro – so I made the only logical decision to create a simple pong clone. I’m glad you aren’t able to see the code in that one; it’s downright terrible. But then again, so is Seal Hunter’s. ;) Anyhow, soon as I felt a bit more comfortable I simply ripped the main ice climber graphic from The Seal Hunter, and actually managed to have him walk around on the ice without it looking all too terrible. (Well, there were no real animations, so it actually looked really terrible.)

Have a look at the two screenshots for a comparison that proves, mainly, how far things have progressed since this first prototype and how utterly utterly bad said prototype was. 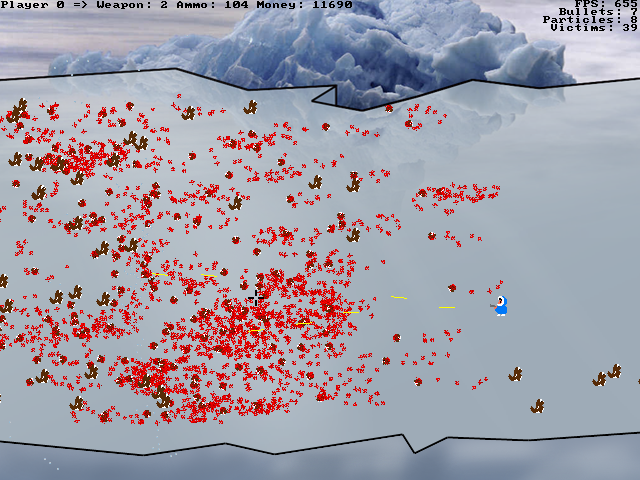 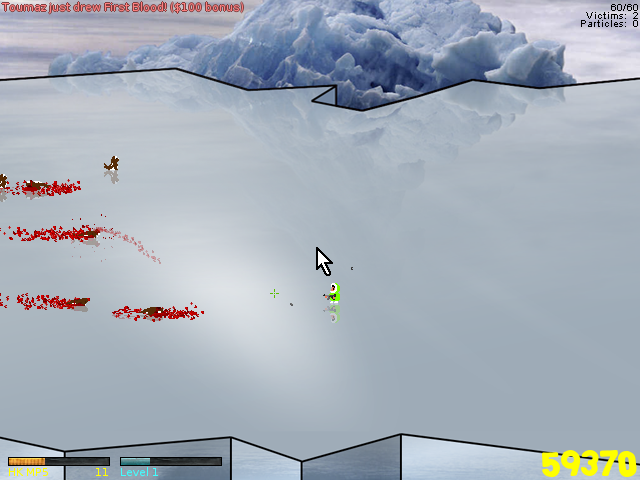 …Yeahhh. The first screenshot is from the oldest version of SH I still have, and its executable weighs in at a stunning 64 KB – and even then, it took me 237 builds to get that far! Things were really quite experimental back then, and looking back, I had some really weird ideas in mind before deciding on the ‘simpler’ remake with multiplayer support. The more observant readers might notice that in the first picture there’s an actual crosshair that could be used to actually shoot in any which direction you wanted; including to the right of the actual player. Needless to say, this idea was dropped rather swiftly – to put it bluntly it kind of ruined the original concept, and very thoroughly at that. There’s no animations at all, and the blood is very crude looking. What is interesting to notice is that there was a limit to how far a bullet could travel in this version – after reaching that limit, it’d simply shred into the ice and cause a bit of snow and ice to spray from its point of impact.

As for the second second screenshot, I’ll just let that be a teaser for the time being. There’s still a rather long way to go before actually discussing the version I’ve got today. Oh, and in case you were wondering: there’s no set date when a possible beta phase will be reached, or when the game itself will actually be finished. As mentioned earlier, Real Life™ and procrastination goes a long way in slowing these things down.

Until next time, adios!